I wouldn’t be a very good Marxist or feminist midwife if I didn’t have some things to say about what’s going on in the world. But once my first three months of the new job were over, I finally had energy to do more political work, and therefore have had less time for blogging.

I am trying to carve out more time to write on this forum about the ongoing war on women, and what people of all genders and political persuasions can and are doing to fight it. I wanted to share just a few things here about what I’ve been thinking about, and that I hope to explore more in later, more in depth posts. 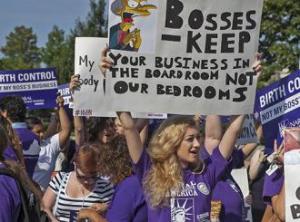 The Hobby Lobby decision prompted immediate protest at the grassroots

First, the Hobby Lobby Supreme Court decision of last month irked me more than I can say. It was an insult to science and to “freedom” and to women’s bodily autonomy. And so everything I wanted to say about it was published over at SocialistWorker.org, in this piece: “The ‘Freedom’ to Deny Women Healthcare.” I have more to say on the resistance to that decision, especially how defensive everyone is about contraception, but that will hopefully be developed in another upcoming article in that publication.

Also, I follow with great interest the ongoing legal battles over forced surgical birth, and their connection to abortion and other reproductive rights in this country. I really liked this piece, and laud Jennifer Goodall for her courageous stance for normal birth after c-section: “Pregnant Women Warned: Consent to Surgical Birth or Else.” Women losing the right to how they give birth is intimately connected to the right to contraception and abortion — another topic I look forward to exploring more in this space and others.

You must see this film. #ObviousChild

On a lighter note, I LOVED seeing Obvious Child in the theaters on its brief stint in my city. What a *fabulous* and hilarious comedy about abortion, of all wonderful things. There is nothing so wonderful as a bunch of sex-positive, abortion-positive, pro-woman people dealing with an unplanned pregnancy in a very real way on the big screen. I have heard people say that if Knocked Up or Juno were about abortion, there wouldn’t have been a story. But guess what — you can have a story when an unplanned pregnancy results in abortion (like half of all unplanned pregnancies do in this country) — that story just happens to then focus on the woman herself. Revolutionary.

Finally, I am sick to death of the divisive commentary that passes for analysis about why the LGBT movement has made strides, while the war on women continues. This disturbing piece from the Daily Beast, “Ten Reasons Women Are Losing While Gays Keep Winning” has its response from yours truly coming up quickly. Suffice it to say that biological determinism has no role in progressive analysis, and apology about abortion is what got us further entrenched in the war on women, and will not provide our way out.

Too many teasers? Sorry. Let’s say this is my way of holding myself accountable to myself and my readers. It shall be written!